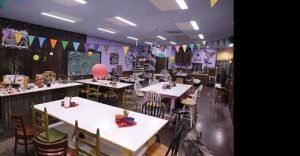 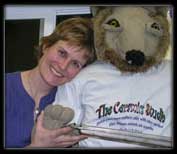 Melissa poses with the human-sized stuffed coyote character; which you will see at The Ceramics Studio.

Prior to residing outside the studio, this same coyote greeted her father’s customers when they visited Baker’s Hardware in Glendale, CA in the 1990’s.

The founder, Melissa Thomson, is quite sentimental and family-oriented so when she opened The Ceramics Studio, she chose the coyote as her mascot! Why? Because the coyote was her father’s business’ mascot for decades! Her father owned a hardware store in Glendale and he chose the coyote because of his fondness for Chuck Jones’ Road Runner animated series. Because the Wile E. Coyote character is owned by Warner Brothers, the coyote used has been modified to steer clear of any infringement. Melissa is proud to keep the tradition of the coyote mascot going into a second generation of a family-owned business.